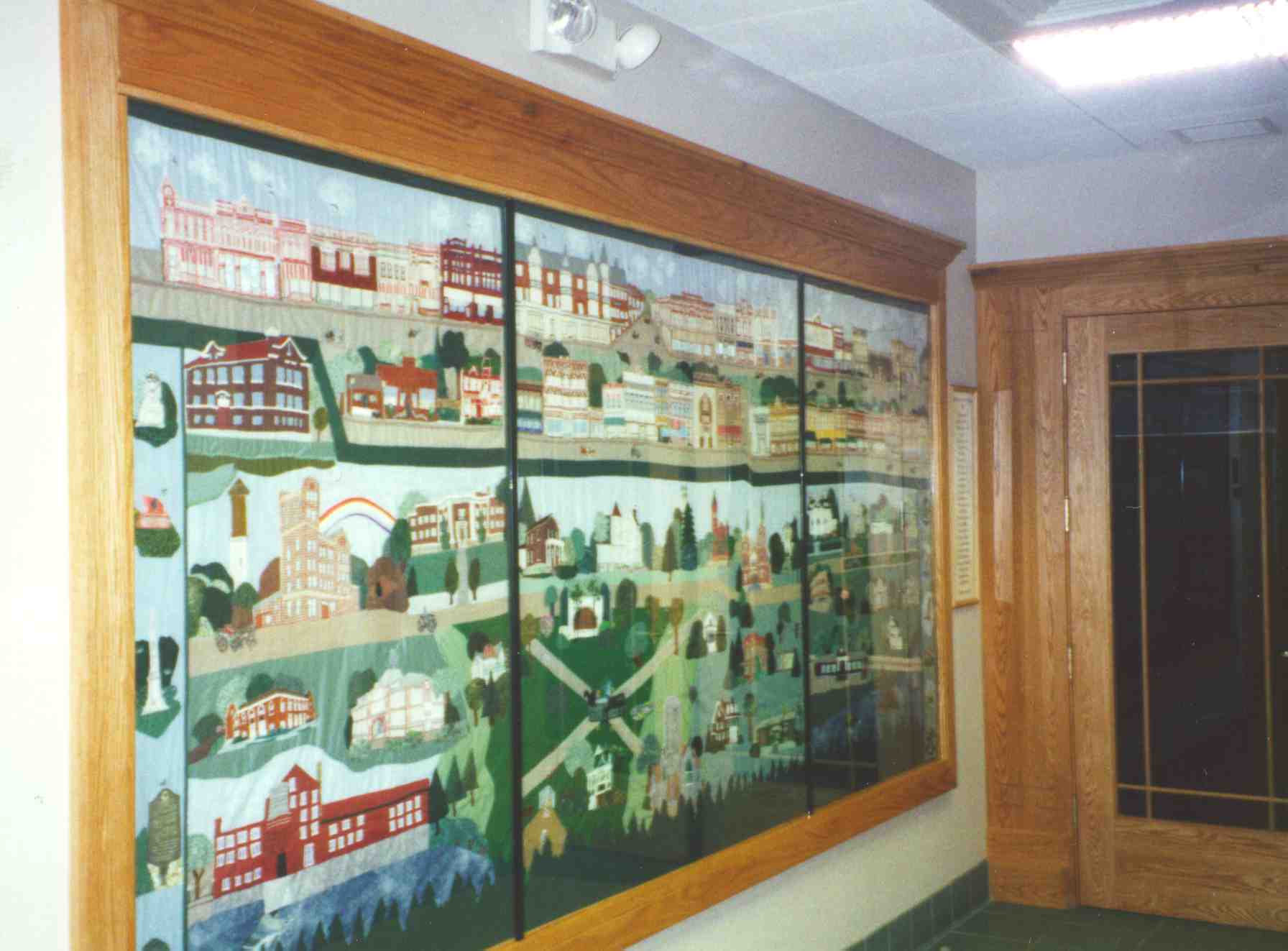 From planning to completion, the fabric mural took approximately 1-1/2 years. It's a combination of applique, embroidery, machine and hand stitching. Tiny tatted flower shapes in a variety of colors enhance the landscaping aspect of the mural. Drawings of main street provided a basis for determining size and scale of buildings. For those properties no longer in existence, research and reconstruction was necessary. The drawings were transferred to cloth and the ladies then used their individual talents and creativity to complete a piece. Sometimes, several people did various aspects of one building. The fabric mural is a triptych 12 1/2' long. The side panels are 3 3/4' and the middle is 5'.

The mural was suggested by Irma Harder of the Sesquicentennial Committee. The mural is not meant to be a map of Reedsburg, but to applaud the Main Street restoration, to evoke memories of buildings that no longer exist, and to include houses of historical and or architectural interest.

When the new Reedsburg Library opened, many visitors were intrigued by the chalk drawings on display around the periphery of the interior. These 4'4 long by 8" wide renditions of scenes in nature were originally commissioned to hang above the fireplace in the old Carnegie Library. Executed by Ethel Nott during the first half of this century, they depict the changing seasons and were designed to be rotated during the year. This collection consists of approximately 24 pastel drawings which have retained their muted colors through the past half century.

Ethel Allis Nott was born on a farm on June 19, 1890 in Columbia County, and passed her childhood in Lodi. She was a student of commercial illustration at the Chicago Academy of Art, and taught perspective and free hand drawing in Battle Creek, MI. She later took a course in photographic retouching in Chicago and worked in that trade in Illinois, Iowa, Michigan and finally in Reedsburg at the Gregory Studios. Miss Nott was also keenly interested in the beauty of nature, and its feathered inhabitants, that surrounded her. She served for many years as a voluntary observer for bird migration for the U.S. Bureau of Biological Survey, now know as the Fish and Wildlife Service. She as elected associate member of the American Ornithological Union and a member of the Wisconsin Society of Ornithology.

Ethel is remembered as a diminutive lady; a spinster who lived with her old maid sister. She was a common, ordinary person who was several decades behind the styles of her day. Sporting a large flower-covered hat, she could often be seen around the city, sometimes carrying a pink filly phrasal, pursuing her passion with easel, chalk or watercolors. "My father always called {Ethel} the "Swamp Angel", recalled Margaret Schierholtz in a recent interview. "She would be down in South Park [near the river] painting birds and studying nature". Gertrude Harper recalled seeing the sisters walking the streets of Reedsburg in their long skirts. "They did their own sewing. I remember her sister [Jessie] had a little round hole in her front tooth. I think it came from all the sewing she did when she bit off the thread. I remember that used to fascinate me". "Ethel was a nice appearing lady", recalled Hazel Struebing a neighbor of hers on Pine Street, "[she was] very neat and always wore a hat while walking wherever it was necessary to go". Hazel also remembered that Miss Nott wore her hair in large puffs over her ears, as was the style during the early part of the century.

When Reedsburg celebrated the 75th anniversary of its founding in 1923, Miss Nott was asked to paint the scenery for the pageants put on by the citizens and churches of the city. Rev. T.S. Beavins, pastor of the Methodist Church, wrote and conducted the programs. There was a different pageant each night for a week. "It was difficult for Ethel to get the [stage settings] finished in time, " recalled Mrs. Struebing, "but she did". Many of Ethel's pastels were done during the WPA years and were also for sale in the area during the 1920's. Emilia Huebing recalled that during the depression, Ethel also rebound old books. Ethel was also dedicated to her church, the First United Methodist, and taught Sunday School there for 27 years. She would often regards her students accomplishments with small drawings she had created for the occasion. A large painting done by her, entitled "Brown Thrasher", hangs in the parlor of the church. Mrs. Struebing lamented that it was too bad that Ethel "didn't live to see how much enjoyment her artistic ability brought to the community". Ethel Nott died August 10, 1952 and is buried in Greenwood Cemetery.